After a decade in business, printing technology was changing, and John saw an opportunity to add 3D printing to NancyScans’ services. In 2009, he approached
Columbia Economic Development Corp. to help finance the purchase of a new 3D printer. The loan was approved, and soon NancyScans
was offering 3D photographic printing, which was followed by 3D photographic sculpting utilizing a CNC carving router.

More recently, John has been creating 3D prints of artworks through a related business he formed, 3DPhotoWorks. Any 2D image can be converted to 3D, which creates
a bas-relief print. tactile fine art printing is now exhibited in museums throughout North America, which has opened a whole new world for blind people.

“Being able to experience art through touch has allowed sight-impaired museum visitors to capture visual information without assistance,” according to John.
“They tell us that experiencing art and photography on their own creates a sense of increased freedom and independence that is life-changing.”

Drafted at 19, John Olson served as a combat photographer in the Vietnam War. From there, he became the youngest staff photographer ever hired by Life Magazine.
He had never met a blind person before embarking on his latest venture. But as a photographer, he wanted to make sure everyone, including the world’s
285 million blind and visually-impaired people, could experience art and photography the way he does.

3DPhotoWorks has completed 15 museum installations at six museums in Canada and the United States. John and his team are currently producing
museum projects for the blind in the U.S., Europe and the middle east. He has appeared on Fox News Channel, CNN, and in People Magazine
to talk about people “seeing” art, some for the very first time.

“Without the loan from CEDC, we would not have been able to serve the blind community,” said John Olson. “CEDC provided the foundation for creating
world-wide change for blind people.”

NancyScans and 3DPhotoWorks are located at 124 Hudson Avenue, Chatham, NY. They can be reached at (800) 604-1199 Monday through Friday
from 9am-5pm. Please visit 3DPhotoWorks.com to see blind people discuss “seeing” art for the first time. 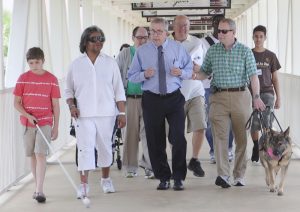