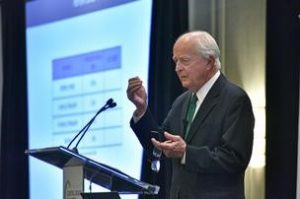 Hugh Johnson is forecasting that the worst of the economic crisis brought by the coronavirus pandemic is over — but he stresses the recovery will likely be U-shaped and not a fast turnaround.

As chairman and chief investment officer of Hugh Johnson Advisors, Johnson has developed a reputation as a highly regarded analyst, with his commentary featured in The Wall Street Journal, Bloomberg and other media outlets. Each year he gives an annual economic forecast to Capital Region business owners and executives.

He’s been updating 2020’s economic forecasts as the country, the state and the Albany area grapple with the Covid-19 pandemic.

Johnson said this recovery is playing out “almost picture perfect” mostly due to the unprecedented billions of dollars in stimulus the federal government has extended to help businesses and individuals bridge this time.

While the stock market’s gains have been increasing steadily over the last few months, there are still about 14 million people filing weekly unemployment claims across the country, and many businesses have said it will be a struggle to survive the year.

“How do you explain the financial markets and the performance of the stock market when we see such dismal economic conditions? Simple answer is investors are looking at the stock market leads the economy. They’re making decisions on a basis of not where we are but where we are going. It’s sending a clear message: The economic recovery we saw starting in May or June and continuing in July will continue this year.”

Johnson said it will not be a recovery without risks.

“This was a world of extremes,” he said. “We had an extreme recession and it was extreme in two ways: shorter than any we’ve ever seen, deeper than we’ve ever seen.”

One of the risks, Johnson said, is if we have a second wave of the virus and are forced to roll back reopenings.

“The message of the stock market is that is not going to happen. That’s important,” Johnson said. “It’s telling us clearly that we may have some rollbacks to the reopenings and the economy may not be as strong, but it still isn’t going to be bad.”

Another risk is the election. Johnson is forecasting that Joe Biden will almost certainly win the popular vote. He said that doesn’t mean that will be the outcome of the election, citing the 2000 and 2016 races as examples.

“If it is, investors might get nervous because a Democratic victory most likely means higher corporate taxes and an increase in the capital gains tax along with significant spending on infrastructure and a far less generous or accommodating antitrust policy,” Johnson said.

For the Albany area, Johnson stressed that it will be a U-shaped economy and will likely take a few years to get jobs back to their previous level.

He said that the Albany-Schenectady-Troy metro area lost 56,000 jobs in the second quarter. The most recent numbers from the state Department of Labor show the region was down 46,800 jobs in July compared to the year before, out of a workforce of about 400,000. In New York State as a whole, the economy lost 1.9 million out of 9.2 million base.

“The numbers were big. It’s a reflection of small business,” Johnson said. “The impression I’m getting is a lot of businesses are not going to reopen or at least not reopen as they were.”